The reason why Yushan Longsuojing silk powder is so recognized by the public is inseparable from its consistent quality, health, safety, hygiene and green product quality.

Ge Xianping said that from the beginning of sweet potato planting, it has always insisted on not using pesticides, not using chemical fertilizers, and maintaining the quality of sweet potatoes. The raw material is sweet potato starch. A fully automatic starch equipment production line is used in the production process. Adhere to the processing of fresh potatoes and adhere to zero addition. The taste of the fans will be good. After the food is formed, it will become a green and healthy food at the table.

In 1998, Ge Xianping started a business under difficult conditions, and did not have a special delivery room. Instead, she chose to produce a sweet potato starch in the form of a family workshop. The starch production process is good, and the fans who make it are highly transparent. The distant neighbors know that Ge Xianping's glutinous rice is good, and she is attracted to buy it. The net profit reached more than 10,000 yuan. With the first bucket of gold earned by hard work, Ge Xianping has gone further and further on the road of processing powder and has continuously expanded its business scale. Thus, the second year's output was 20,000 catty, and the third year was 40,000 catty.

In May 2003, a professional cooperative was established. The professional cooperative was responsible for organizing farmers to do land integration, planting, and fertilizer distribution.
In 2008, the company began to introduce new varieties of high-starch sweet potato varieties, distribute seeds to farmers free of charge, provide technical services, increase purchase prices, and mobilize farmers' planting enthusiasm.
The company was established in early 2009 and was officially established in September 2011 as Chongqing Yushan Town Longxujing Silk Powder Co., Ltd.

Goodway sweet potato starch equipment helps Yushan crystal silk powder to a higher level
After the establishment of the company in 2011, faced with huge market demand, Ge Xianping realized that the existing machinery and equipment work capacity, sweet potato purchase volume and product types are far from enough to meet the company's development needs.
Coupled with the intelligent development of the era of technology and machinery manufacturing, she learned that, unlike the production of hand-made starch, mechanical production is significantly more efficient and efficient, and equally healthy and safe. Starch quality is more pure. The fans made are very good and the taste is excellent. Productivity has also increased dramatically.

Therefore, Ge Xianping followed the development of the times and chose to purchase professional sweet potato starch processing equipment. The use of machine production instead of manual processing guarantees the rapid growth of sales volume of Yushan crystal silk powder.

In the face of Ge Xianping's work attitude with enthusiasm and responsibility, General Yang, including the engineers and sales staff of Goodway Company, has consistently served the spirit of service and sincerely and enthusiastically received the inspectors. This makes Goodway feel the professionalism and strength of Goodway. Ge Xianping learned that Goodway's products---automated starch production line can mechanize the whole process from raw material input to finished starch production. The production line has high automation, low labor demand, low labor intensity and short processing time. It can customize the production line according to the actual situation of the user to meet the different needs of customers. And this just meets the needs of Ms. Ge Xianping. So the two sides were so happy to finalize the first cooperation.

Since then, Goodway starch equipment and Ge Xianping crystal silk powder company has launched a series of in-depth cooperation.

In 2012-2014, Ge Xianping purchased the starch equipment from Goodway twice and has been successfully put into production.

The first new attempt: In 2011, Ge Xianping spent more than 200,000 yuan to purchase the automatic production line of sweet potato starch in Goodway potato industry. The output from fresh potatoes to finished dry starch takes less than 30 minutes. Not only the yield of starch has increased, but also the production of higher quality starch has helped to improve the overall quality of Yushan crystal silk powder and achieved good results. In 2011---2012, the company's annual output value reached 2000--30 million. Ge Xianping did not stop here, but with great confidence in the sweet potato deep processing industry, began to move toward a more ambitious goal. 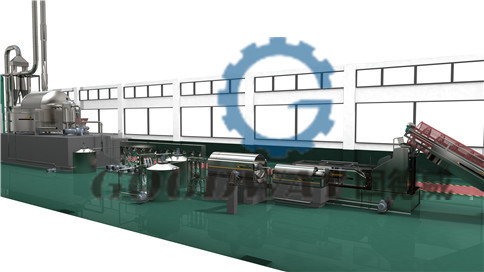 The second upgrade of equipment: In 2014, as the scale of the business expanded, Ge Xianping increased investment, chose to upgrade equipment, and purchased two sets of starch equipment again, and required that the materials of the equipment include all stainless steel materials. Machine life, starch productivity, and starch quality have also been greatly improved. In 2014, Ge Xianping acquired 15,000 tons of sweet potato in Pengshui County and produced 3,000 tons of tantalum powder. The output and output value increased by nearly 5 times compared with 2013, driving more than 2,000 farmers to earn an average annual income of nearly 10,000 yuan on sweet potato. In addition to being sold to Chongqing's main city and surrounding provinces and cities, the company's crystal silk powder is also exported to Hong Kong, Japan, South Korea and the United Kingdom, and its productivity has been greatly improved. With the development of the purple potato industry chain, Ge Xianping expects to break through 100 million in 2018.

In the after-sales return visit, Ge Xianping said that the equipment purchased at Goodway helped increase the processing capacity of fresh potatoes. The color of sweet potato starch is white and delicate, and the crystal powder produced by the sweet potato is crystal clear, and the taste after cooking is more praised by customers.

Grasp the starch off, then the quality of the vermicelli noodles is also the top grade. I believe that under the leadership of Ge Xianping, Peng Shui crystal silk powde's footsteps will continue for a long time.

While Ge Xianping persisted in persisting in the deep processing of sweet potato, Goodway, as the foundation but the key mechanical auxiliary force, will focus on the potato industry machinery, standing at the forefront of science and technology, and continue to lead the industry. Goodway will make more contributions to the field of potato starch processing equipment, helping potato processing enterprises like Yushan crystal silk powder to take it to the next level.